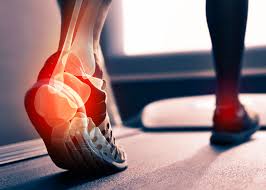 Firstly, to clarify, tendons attach muscles to bone (as opposed to ligaments which attach bone to bone).  Tendon injuries, known as tendinopathies, are usually found where acute irritation occurs when breakdown of an area of the tendon exceeds repair.  The forearm extensors and flexor tendons (tennis and golfers elbow) and the achilles tendon (attaching the calf muscles to the heel) are the most commonly affected.  When the tendon starts to stress and become injured, the collagen fibres of the tendon become disorganised and arranged in a haphazard rather than linear alignment and blood flow increases into the tendon from deeper fibres which increases the water content of the tendon.  The tendon becomes tight, restricted, thick and painful as a result of pain receptors (nociceptors) becoming irritated by the damaged tissue.  The injury can take place at the junction of the muscle fibres with the tendon itself, anywhere in the tendon 'belly', or where the tendon attaches to the elbow, heel or elsewhere.

In the vast majority of cases whether it is the forearm tendon or the achilles, the tendon, which is designed to withstand a great deal of force and tension, will have become injured as a result of being chronically overloaded.  Whether it's from playing too much tennis or golf without being warmed up and with poor technique or running too explosively on hard ground, once there is an injured tendon (tendinopathy), it is important to get the balance right between rest and exercise of the tendon and the muscle(s) to which it is attached.  Stopping all activity or over-resting, in the case of the achilles for example, will weaken the calf and associated muscles leading to cell change and increased probability of injury.
The main causes for tendinopathies are:

Tendinopathies usually start with an ache at the beginning of activity.  This ache then eases with movement but becomes stiff or tender after exercise.  Often the person then continues with their activity and the problem remains fairly low level in terms of pain.  The longer the tendinopathy continues the more chronic and painful it becomes and the harder it is to treat.
In all cases, it is worth initially applying RICEE(Rest, Ice, Compression, Elevation and Exercise gently).  If this doesn't help, do get the problem assessed by an Osteopath to ensure that you get the appropriate treatment for your individual needs – both in terms of hands on treatment and advice as to how to rehabilitate your injury back to health and perhaps buy supports such as Epistraps (for tennis and golfers elbow) or orthotics/insoles (for achilles tendinopathies) as appropriate.
If all else fails, you can be referred for an MRI either via your GP or privately or to a practitioner specialising in musculo-skeletal ultrasound imaging (e.g. Dr Jane Dunbar at Frameworks in Bridge of Allan).  These scans will inform you of the severity of the condition and will let you know whether you need further treatment including injections or surgery.

Cranial Osteopathy: Treatment of babies with colic, reflux and other issues

Back pain: Prevention is better than cure

Other conditions treated by Osteopaths (9 Articles)

What is the difference between Osteopaths, Chiropractors and Physiotherapists?

Back pain - Causes and what you can do about it

Back pain: Prevention is better than cure

Cranial Osteopathy: Treatment of babies with colic, reflux and other issues